The Movement for Democratic Change (MDC) Alliance has issued a statement following the take over of Morgan Tsvangirai House by the MDC-T led by Thokozani Khupe.

At approximately 10pm on the 4th of June 2020, a truckload of armed soldiers and police officers assisted twenty youths to forcibly gain entry into the MDC Alliance Headquarters, Harvest House.

The soldiers severely assaulted our security personnel who were manning the building. The youths locked themselves in the building, refusing to leave. The MDC-Alliance Secretary-General Mr Chalton Hwende immediately attended the scene and tried to make a police report. The Zimbabwe Republic Police refused to take the report and advised that he should speak to the soldiers who in turn denied the Secretary-General entry to the building. 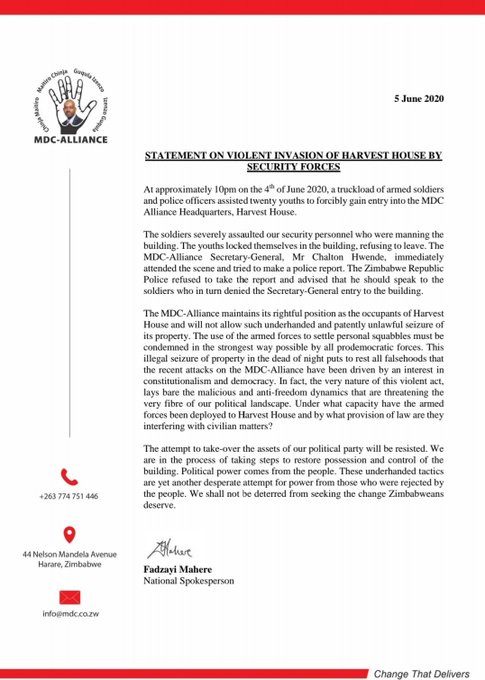 ‘Mnangagwa And Chamisa’s Don’t Care About The Suffering Masses’

‘Mnangagwa And Chamisa’s Don’t Care About The Suffering Masses’