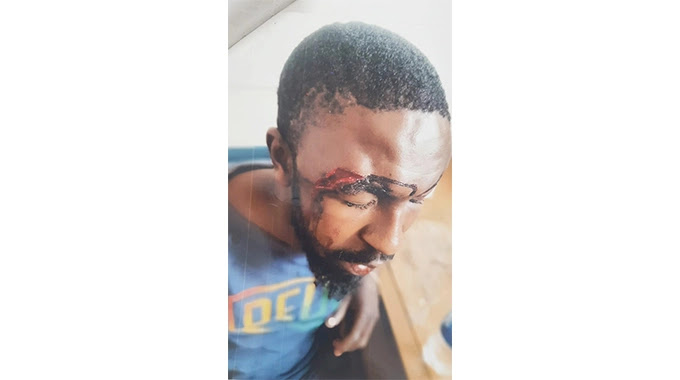 A trainee doctor from Bulawayo who suspected his pregnant partner of cheating had his suspicions confirmed in a dramatic way.
The two men he saw having s__ex with his lover in a city lodge and flat cried.

Prosper Mpofu (27) beat Erick Gumbo from Nkulumane after catching him having s__ex with his girlfriend Abercy “Spongy” Chishapira in a city lodge.

Mpofu threatened to cut off Gumbo’s manhood, according to reports.

Mpofu also beat Butholenkosi Gula Ndebele with fists and open hands after catching him in bed with his lover at Ndebele’s city apartment.

He then broke his guitar and smashed his 55-inch Samsung TV.

The explosive facts of Mpofu’s rampage emerged when he appeared before Bulawayo magistrate Musaiwona Shotgame.

He pled not guilty, but overwhelming evidence led to his conviction.

Mpofu was fined $70,000 for two assault offences (or seven months in jail). Ten months were suspended for good behavior.

On count three of malicious damage to property, he was sentenced to 10 months, with 5 months suspended for 5 years.

The remaining five months were deferred if he compensated Ndebele for the property he wrecked while hitting him.

The magistrate considered Mpofu’s “passionate” apologies to the court and the two victims, as well as the fact that he was a first-time offender and a fifth-year medical student at Mpilo Hospital.

His pr_egnant, single girlfriend is at the core of these crimes. She bedded the two complainants after luring them with biblical advice.

Instead of discourse, the accused utilized violence to settle a conflict. He injured the victims with force. He intended to mediate girlfriend conflicts without the complainants.

The magistrate contended that the court would postpone the sentence for good behavior and restitution.

Mpofu’s disputed defense brief claimed Gumbo choked him and he retaliated. He stated he overpowered him and Gumbo was lying on him as punishment for catching him with his “wife.”

Mpofu said he grabbed Ndebele when he spotted him with his “wife,” and Ndebele fell on the TV. He stated he smacked him with open hands, and when Ndebele tried to hit him with a guitar, he evaded it and it broke the frame. He disputed the allegations.

Gumbo booked a room at a city lodge on 7 October 2022 about 3pm where he had intercourse with Chishapira.

While the two were in the act, Mpofu barged in and attacked Gumbo with fists, cutting his eyelid and leaving bruises.

Mpofu allegedly stepped on him and took out his sexual organ to cut it off.

Gumbo thought Mpofu was a ghost as he burst into the room.

On 10 October 2022, Ndebele met Chishapira in town and took her to his flat for s_ex.

While the two were enjoying themselves, Mpofu allegedly barged into the bedroom and attacked Ndebele with fists and open hands, accusing him of having an affair with his “wife.”

Mpofu then attacked him with a guitar, breaking it.

His 55-inch Samsung TV fell and shattered when he kicked it.

Two victims reported Mpofu to police, who arrested him. B-Metro