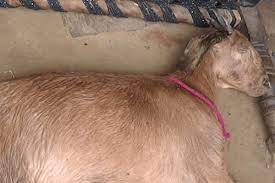 A 20-year-old man from Godlwayo Village 3 in Esigodini District, Matabeleland South region, was lucky to avoid prison after being convicted of rσping a goat that died during the deed, allegedly from tiredness.

Mthandazo Ndlovu, the goat rσpist, appeared before Esigodini resident magistrate Nomagugu Sibanda, who charged him with two charges of bestiality under Section 74 of the Criminal Law (Codification and Reform) Act Chapter 9:23.

He pleaded guilty to both counts and was sentenced to 18 months in prison, six months of which were suspended for three years on the condition that he not be convicted of any offence involving bestiality committed during that period, for which he is sentenced to imprisonment without the option of fine.

The remaining 12 months were suspended on condition that Ndlovu completes 420 hours of community service at Godlwayo Primary School, B Metro reports.

The court proved that Ndlovu performed an act that would make “any right-thinking member of society sick to their stomach,” when he rσped Brighton Nkomo’s goat to death before he was also caught red-handed romping with Luckson Mkandla’s goat.

Circumstances are that on 28 October 2022 and at around 10pm Ndlovu who was employed at Phat-Ore Mine, went to Nkomo’s homestead and upon arrival he entered his goat pen.

While inside the goat pen, he had s_ex with one of his female goats. It is reported that the goat died during the act.

It is reported that the following morning Nkomo went to the goat pen and found one of his female goats lying unconscious and upon checking it, he found it dead with some semen on its rear.

Nkomo reportedly tracked a trail of footprints from the goat pen and they led him to Ndlovu’s home.

It is reported that on 31 October 2022 and at around 3am, Ndlovu who was apparently on a s_ex spree with goats, went to Mkandla’s homestead and upon arrival, he got into his goat pen.

While inside the pen, he took off all his clothes and grabbed one of the female goats and forced it to lie on its back and rσped it.

Apparently out of pain, the goat bleated continuously and that prompted Mkandla to wake up and go to the pen to see what was happening.

Mkandla reportedly stealthily moved to the goat pen and upon arrival he flashed his torch and was shocked when he saw Ndlovu busy like a rabbit having s_ex with one of his female goats.

In a swank of shame, Ndlovu fled nσked leaving behind his clothes in the goat pen.

By that time Mkandla who had already recognised Ndlovu went and reported the matter to the police leading to his arrest.

His clothes which he left in Mkandla’s goat pen were used in court as an exhibit.