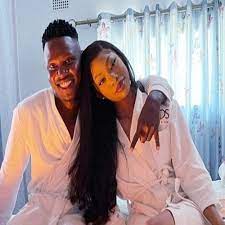 Shashl, a Zimbabwean R&B singer, has spoken out after her bedroom tape with Zimdancehall Dj Levels was leaked on social media claiming that he is refusing to accept rejection.

Shashl, the daughter of former Health Minister Obadiah Moyo, accused Levels of leaking their bedroom tape as retaliation after the video was leaked. She claims that Levels leaked the s*xtape after she told him she no longer wanted to be with him.

Levels has leaked their private photographs before, according to the Ghetto Buddies hitmaker. She claims he leaked a video of them kissing after she told him she wanted to break up with him earlier this year.

Levels, according to Shashl, has been physically and verbally abusing her.

Levels, she claims, would beat her up or yell at her if she did not answer his phone calls. Shashl revealed that Levels once assaulted her and left her with bruises.

Listen to the audio player below;

Meanwhile, Fellow music producer DJ Fantan wrote on his Facebook page today that he had failed to get in touch with his partner and claims his partner has disappeared.

“Levels, all efforts to get in touch with you have failed. But please never forget how far you have come and all the times you have pushed on even when you felt like you couldn’t. Getting knocked down in life is a given but there are a lot of people who need you and are waiting to hear your side of the story. Maziviro andokuita hangu ini, I know u are strong and you are clean like Jesus police record,” Fantan wrote.