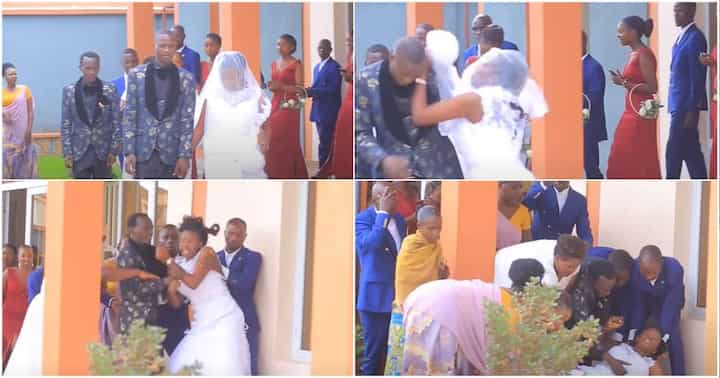 Chaos ensued at a wedding after the bride suddenly lashed out at the groom during their wedding in Rwanda.

Footage captured at the wedding depicted the bride and the groom exiting a grand building before heading to church for their nuptials.

The groom wore a back and purple outfit while the bride donned a lovely white gown. The bridesmaids and groomsmen lined up behind them wearing maroon dresses and blue suits.

All seemed well until the bride suddenly went diabolical.

The two held hands as the bride carried a bouquet. She suddenly let go of the groom’s hand and slapped him on the back of the head.

She then threw the bouquet away then gathered her flowing gown ready for a fight, before the best maid rushed to intervene.

The best man and the rest of the bridal team jumped in to restrain her, as she tried to hit her fiancé again.

They had a hard time calming down the infuriated woman who eventually dropped to the floor. Some of the bridesmaids could be seen crying.

The bride was later seen speaking to a woman on phone in Kinyarwanda.

Netizens were stunned by the scenes, as some said it was scripted.

Shallot Ruth: “Sadness has consumed me. I can’t hold back my tears.” Annet Queen: “Is that true or a movie.”

CM: “This is an advertisement.”

THIS IS WEIRED…COULDN’T SHE WAIT FOR THE NIGHT
Doctor Bong’nkosi
Is this real or a story?
Advertisement
Related Topics:
Up Next