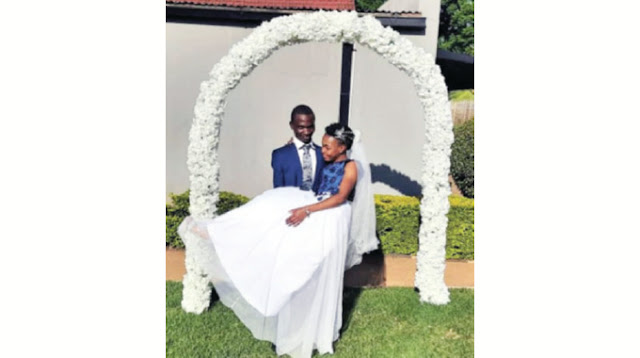 PAINFUL wails and heart-wrenching sobs filled a local mortuary hall in Bulawayo yesterday as two families that witnessed a marriage that lasted 10 days ago said their goodbyes to the couple that had united them.

The couple, alongside Thabitha’s sister, Nkosinothando Sibanda (42), died on the spot on the morning of January 7, following a car accident at Kranskop, Limpopo Province in South Africa two weeks ago. The accident also claimed the life of an unknown friend of the couple who had asked for a lift and left the couple’s one-year 11-month-old daughter critically fighting for her life at a South African hospital.

The bodies were at a mortuary in South Africa as Nkosinothando’s family was raising funds for her body to be brought back home as she had no funeral policy.

Efforts were spearheaded by radio personality Mr Ezra “Tshisa” Sibanda and the families managed to raise the funds to bring her back home.

Just like how the South Africa-based couple brought together hundreds of people at their wedding, in Bulawayo, the couple and Nkosinothando managed to lure hundreds yesterday, if not more, this time for a sad and emotional farewell.

Three hearses led hundreds of people to the Umvutsha Cemetery in Bulawayo, where the trio was laid to rest.

See Also: Happy Never After: Newlywed Couple Die In Crash On Way To SA From Zim

Zion Church members sang their hearts out and danced raising dust at the cemetery as they bade farewell to their departed fellow brethren.

Residents from Magwegwe and Entumbane suburbs were all in disbelief as they watched the bodies of the trio being lowered into the graves with many saying they had seen how happy the couple was on their wedding day and could not believe their life had been short-lived in such a way.

When the first heap of soil hit all three caskets in their graves many could not hold back their tears with some in the crowd murmuring “lesi yisilonda esingapheliyo”, loosely interpreted as this is a wound that will never heal.

A Chronicle crew visited the families after the burial and they said the trio spent the last 10 days of their lives making jokes and being happy.

Mrs Sithabile Tshabangu, a representative of the Mbambo family, said they had lost a fun trio that kept everyone happy.

She said the wedding of Masuku and Mbambo had been a beautiful ceremony, which they all thought was the beginning of a beautiful journey, only to discover 10 days later that it was the couple’s way of bringing families together in their presence for the last time. “The two girls are my sister’s daughters. They were, however, brought up by their grandmother, who is my mother. We never thought we would lose them like this and at once,” she said.

“The couple had just gotten married and was preparing for their traditional wedding which was supposed to take place in April. We are deeply wounded as a family to have buried them today.”

Mrs Tshabangu said they heard about the accident in the early hours of January 7, as they had left the previous day to go and prepare for their jobs.

She said the sister to the couple had been joking with her grandmother a day before the accident saying she must hold her for the last time.

The day before they left Nkosi was troubling my mother sitting on her legs telling her she should enjoy holding her for the last time. It is a pity we did not know she was saying goodbye.

“We are deeply wounded by their death. Both girls left one daughter each. Nkosi’s daughter is six-years-old. She just started school this year,” said the aunt with eyes full of tears.

Another family member, Mr Mbuzeni Mbambo, said the family was grateful to Mr Ezra “Tshisa” Sibanda and everyone else who contributed to bringing one of their sister’s body into the country as she did not have a funeral policy.

He said he hoped Mr Sibanda and everyone else who contributed continue with their kind deeds and extend the same assistance should any other family come forward looking for help.

A resident from Magwegwe, Mr Vincent Dube said the accident left everyone wounded and it would take time for residents to heal.

He said Masuku grew up in the suburb and everyone knew him as an affectionate young man who loved attending and participating in church.

“We were all celebrating on December 27 when Shaddy brought a daughter-in-law for our neighbours.

“Little did we know he just wanted to die as one with his wife. I hope their little girl makes it out alive so she can be the one to soothe the families’ wound,” said Mr Dube.

Another resident from Entumbane only be identified as MaNdlovu said she could not believe it when she was told that the two sisters died together on the same day.

“The two girls were inseparable. Even when they were growing up, we would see them together everywhere. It is sad they had to end up dying together. We also greatly lost as a community because they were our children,” said MaNdlovu. Chronicle