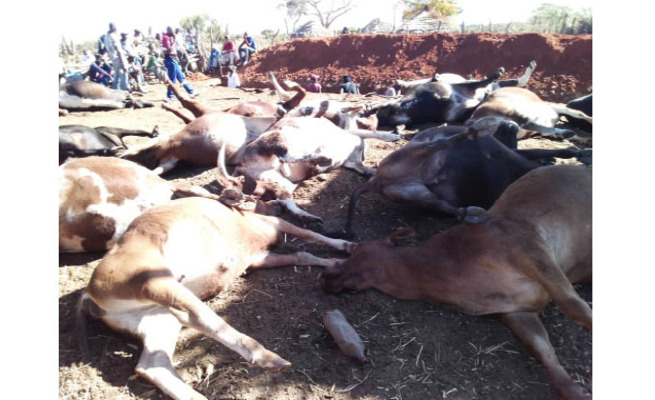 A HAULER hit a herd of cattle around Halfway on the Bulawayo-Victoria Falls Road, killing nine.

The Chronicle was told the tragedy happened Wednesday at 6 PM as livestock crossed the road from a local water source.

A Botswana-registered truck hit 11 animals, killing seven on the scene and two elsewhere.

The accident happened between Halfway and Gwayi river on the way to Bulawayo.

Witnesses say the truck was undamaged and no one was hurt.
Villagers spent the night protecting the carcasses and waited for police, said Chimwara 1 village leader Soda Ngwenya.

He stated the cattle’s owner hasn’t been recognized, but the meat was sold to travelers and townspeople.

“It appears the livestock were crossing the road when hit. We waited for cops there.

We halted a police car travelling from Bulawayo to Hwange. They promised to tell those at Gwayi base to come, so everyone waited until daybreak.

Farmers should keep their animals off highways. He stated this endangers motorists and livestock.

Farmers should protect their livestock. Once people realize farming is a business, we won’t have animals on the highways, he said.

Mr. Munodawafa urged drivers to avoid nighttime driving and avoid speeding if they must.

The Bulawayo-Victoria Falls Road is one of the most dangerous routes to drive at night, especially from Umguza to Fatima.

At many crossings, wild animals represent a hazard.

In April, a CAG bus traveling from Victoria Falls to Harare killed three elephants near Mbizha and Matetsi.

The bus merely damaged the driver’s side front window and 45 passengers fled unharmed.

Near 2019, a bus killed three buffaloes on the same route in Lubangwe.

On the road, motorists have killed several donkeys and livestock.