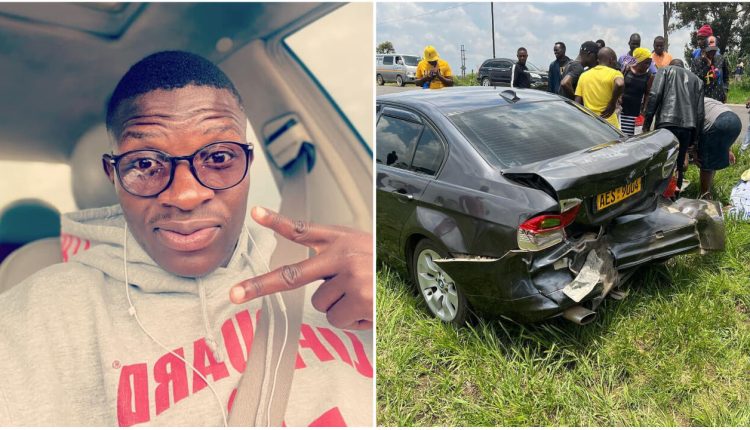 Popular Star FM presenter DJ Ollah was involved in a car accident on Thursday while travelling along Seke Road.

The On The Spot show host, who has been making inroads in the entertainment circles, confirmed the incident saying he is ok.

According to DJ Ollah, another vehicle rammed into the back of his car causing substantial damage although “thankfully” no fatalities were recorded.

A legion of his followers, including Oscar Pambuka, a former television personality, empathized with him.

“Oh very sorry co-presenter. We give thanks to the Almighty for the shield.”

We thank God for his mighty hand of protection over you. We render the hand of the enemy powerless over your life, career and future endeavors. Praying for you

Between January and September of this year, Zimbabwe had 1,559 road fatalities and 7,851 injuries, according to a government minister.

Speaking at the World Day of Remembrances for Road Traffic Victims (WDR) in Bulawayo on Saturday, Transport Minister Felix Mhona stated that the government is concerned about the enormous number of road accidents in the country and intends to convene a stakeholders indaba to address the situation.

“This year alone, from January to September 2022, we had 38776 crashes, 1559 killed and 7851 injured. This translates to a traffic collision every 15 minutes, an average of 45 injuries per day and an average of five deaths per day. Friday nights, Saturdays and festive seasons are the worst,” said Mhona.

The minister assured the nation that government is committed to reducing accidents on the roads.

“As government, we are aware of the threat of road deaths to health and development. As a result, we committed our country to action in line with the Second Decade of Action (2021- 2030) with the road safety goal of reducing road traffic accidents by 50% by 2030. As a sign of commitment to this ideal and road safety, we also set the 50% reduction in road traffic accidents as one of our goals under the National Development Strategy 1,” said Mhona.

The minister also revealed that about 94 % of road traffic accidents are directly caused by human error.

“The carnage on our roads must stop!! Surely, it can only be through us that we put an end to the silent killer on our roads. This is a war we can win as roughly 94 % of road traffic accidents are directly attributed to human error. A change of human behaviour could therefore easily result in lowering of the worrisome statistics,” added Mhona.