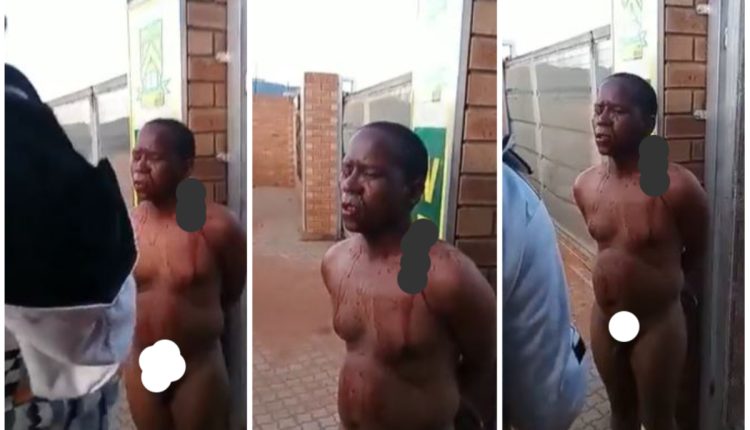 A South African Secondary school deputy principal at Kgagatlou Secondary in Polokwane, Limpopo received deadly instant justice after getting caught bedding a student at his school.

The unnamed teacher was allegedly caught red-handed sleeping with a student in his office during school hours.

The matter was instantly reported to the Mphahlele community whose members did not hesitate in administering mob justice on the teacher.

In a video circulating on Twitter, the n_aked and bloody teacher can be seen tied to a poll and getting a beating.

“Makamela* are you sure you’re sleeping with our children,” one community member can be heard shouting in the video while the teacher is thronged by seemingly angry parents who are also shouting in the background.

Watch the video below: The video contains graphic images, viewers discretion is advised!

According to some unconfirmed social media comments under the video, it is not the first time the said teacher was caught doing his pedophilic behaviour in schools. He is said to have moved from another school before taking the deputy principal post at Kgagatlou Secondary School.

The age of the victim has not yet been revealed.

The principal’s conduct is considered sexual misconduct in South Africa and is punishable by firing and deregistering of the teacher. However, if the student is underaged, the offence is punishable by a prison term.

While some social media users, like the community members in the video, are outraged over the teacher’s conduct, others believe it appears the teacher had consensual sexual relations with the student who is also thought to be of legal age.-iHarare