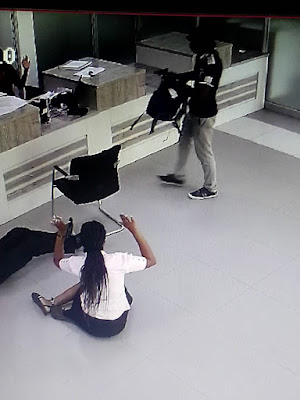 An armed robber made off with an estimated $100,000 after breaking into the ZB bank Victoria Falls branch on Wednesday.

According to sources, the suspected robber entered the bank near the end of business disguised as a genuine client.

He allegedly waited for other customers to leave the banking hall before pulling out a gun and demanding money.

The Zimbabwe Republic Police have yet to confirm the incident, but CCTv footage confirms the robbery, and there are indications that a report has been filed at the Victoria Falls police station.

Armed robbery is on the rise, with a Kwekwe fuel service station losing over half a million US dollars to armed robbers on Tuesday.

You May Like: Armed Robbers In US$582k Kwekwe Service Station Heist

In other news, robbers pounced on a college in Seke and got away with thousands worth of fuel coupons ad cash which were secured in a safe.

According to police, the robbers tied the security guard and blasted off the safe.

“The ZRP is investigating an armed robbery case which occurred at a college in Seke, Chitungwiza, on Tuesday 29 November, at around 0100 hours, where three unknown suspects, armed with three unidentified pistols, attacked a security guard who was on duty at the premise.

There has been a worrying trend where those involved in robberies are former and serving security personnel.