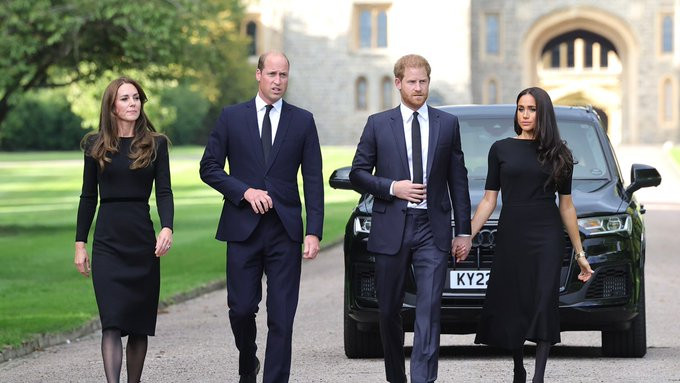 Prince Harry has said he and wife, Meghan Markle were portrayed as the “new kids on the block” who threatened to “steal the limelight” from other royals and that led to problems in his relationships with his elder brother, Prince William and wife Catherine

In the 95-minute interview released Sunday night, January 8, to promote his memoir, titled Spare, he recalled the days when he was the “third wheel” at official engagements and other outings – but his relationship with Prince William and Catherine was particularly warm at that time.

He said he imagined that the warm relationship would continue when he found his own partner and they became a foursome, but it was not to be.

Speaking of his relationship with his brother, Prince William and wife Catherine, he said to Tom Bradby, in an ITV interview;

“I always hoped that the four of us would get on.

“But very quickly it became Meghan versus Kate.

“And that, when it plays out so publicly, you can’t hide from that,”

Harry said negative attitudes about Meghan particularly around her being an American actress were heated up by a hostile press, adding that the stereotypes about Meghan had been a barrier to his brother and sister-in-law “welcoming her in” to the family.

Prince Harry said that while Prince William never tried to discourage him from marrying Meghan he did “air some concerns” and warned Harry: “This is gonna be really hard for you”.

“I still to this day don’t truly understand which part… he was talking about. But maybe, you know, maybe he predicted what the British press’s reaction was gonna be.”

In the interview, Harry also spoke of the emotional impact of the death of his mother, Princess Diana and in his book describes returning to the scene of the car accident in Paris – and asking to be driven through it at the same speed as she was in 1997.

He said: “I’d always imagined the tunnel was some treacherous passageway, inherently dangerous but it was just a short, simple, no-frills tunnel. No reason anyone should ever die inside it.”

A 2008 inquest found Diana was unlawfully killed partly due to the “gross negligence” of her driver who had been drunk and driving at excessive speed.

According to Harry he saw no point in reopening inquiries into the car accident but questioned the official conclusions about the night of the crash.

Harry said that the tunnel posed “no danger of anybody losing control even after a drink or a couple of drinks… [It was] almost physically impossible to lose control of a vehicle unless you are completely blinded at the wheel,” implying that distraction from the paparazzi may have caused the driver to crash.

“The people that were predominantly responsible for it, all got away with it,” he said.

Prince Harry also said that, after Diana’s death, he and his brother William were sat down in a room and told that the events leading to the car crash were “like a bicycle chain”.

“If you remove just one of those links from the chain, the end result doesn’t happen,” Harry recalled being told.

When William asked what might have happened had the paparazzi not been chasing Diana’s car, he was told that “the result wouldn’t have been the same.”

Harry then expressed his hope that he might one day reconcile with his father and brother.

The interview is the first of four broadcast appearances to be aired over the coming days to promote Spare.

NEW clip from the @ITV Prince Harry interview as he talks about grieving his mum.
"I cried once, at the burial”.
"Everyone thought and felt like they knew our mum, and the two closest people to her, the two most loved people by her, were unable to show any emotion in that moment” pic.twitter.com/yX2ZTuR1je