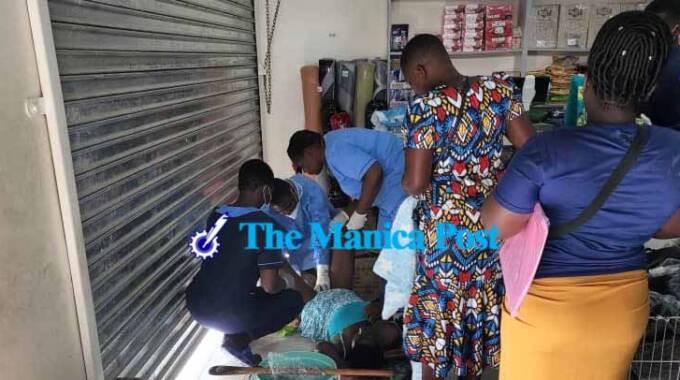 BUSINESS was temporarily halted in Mutare’s Central Business District this afternoon after an unnamed woman gave birth to a bouncing baby boy in a shop.

Hundreds of people gathered at the shop in Mutare’s downtown district to see the woman who gave birth to the boy with the help of a local medical practitioner who raced to the scene and completed the entire labour process, a report by Manica Post reads.

Scores of people gather outside the shop after the incident

Mrs Nomsa Chiadzwa-Chave, the shop owner, and other bystanders who summoned the woman’s relatives also assisted her.

“She entered the shop intending to buy some of the things needed for an expected mother such as towels, health supplies and blankets, among other things. She told the people who were near that she was giving birth before we quickly assisted her. We closed the doors before we called a medical doctor who quickly responded and helped the woman to deliver. Her relatives were called and she was picked up,” said Mrs Chiadzwa-Chave.

In other news, one person was killed and several others injured when a  Rimbi bus belonging collided with the back of a truck on the Harare – Nyamapanda highway at Bondamakara in Mtoko in Zimbabwe on Tuesday afternoon.

The deceased, according to reports, was the conductor of the bus.

In a 2-minute 53-second video seen by Harare Live, which was allegedly recorded by the now deceased, a Rimbi Tours bus is filmed racing with a Zebra Kiss bus.

Passengers can be heard shouting for the driver to overtake of which the person filming responds saying he is not overtaking but gathering evidence of what other busses do referring to the bus blocking their passage.

The speeding bus tailgates the one in front so closely that the passengers beg the driver to slow down.

The video clearly shows that the driver is not able to see ahead of the bus in front of him.

The bus in front changes lanes to overtake a truck, as the Rimbi bus driver goes to the left he finds a slow-moving truck and collides into it.

The bus hit the back of the trailer and reportedly killed the conductor who was filming and left several others injured.

Mapositori Relieved After Muvevi Arrest: “We were now sleeping in the bush”

Jaison Muvevi Begs To Be Taken To Chikurubi