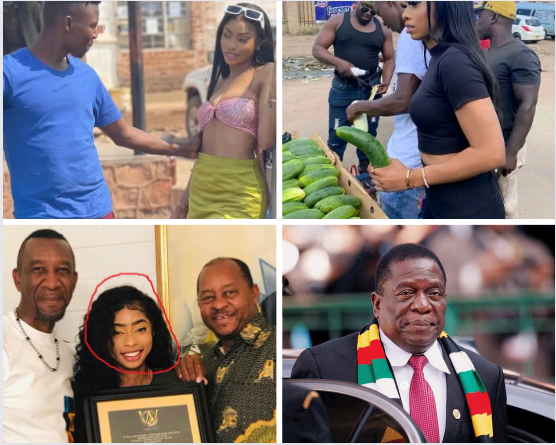 President Emmerson Mnangagwa’s name has been dragged into the Levels and Shashl scandal following revelations that Shashl’s father is using his power to try and punish Levels after their bedroom tape was leaked.

Former  Health Minister, Obadiah Moyo is the father of Shashl and he is being accused of using his political connections to punish Levels.

Youths have, however, thrown their weight behind Levels in defending his freedom saying they support President Mnangagwa hence, the former Minister can not disrupt the President’s relationship with youths.

In an audio, one of Level’s friends who was with him when his phone was stolen says that Levels actually lost the phone and that he never abused Shashl as she alleged.

He says; “Shashl is a liar, in 2019 she lied that she was raped by G5 and the domestic violence is a made-up story. the fact is these people were in love. She should understand that when people break up there is no need to smear someone.

“I was there when Levels’ phone was stolen, Levels did nothing wrong, he never posted anything. She was not even assaulted as alleged.”, he says.

The unidentified youth says Levels is still missing and suspects that something bad might have happened to him.

“Levels has uplifted many ghetto youths. As it stands, we cannot find him, if anything happens to Levels it is going to be a problem. I am not particularly pleased with Shashl and his father’s behaviour.

“Don’t think that you are in the corridors of power you can take advantage of a poor ghetto boy who is trying to make something for himself,” he continues.

He says Levels is a victim of abuse of power yet his oppressors are forgetting that Levels has the backing of many ghetto youths who rely on him and are also loyal to President Mnangagwa.

“Levels has uplifted many people including Enzo Ishal, Herman among others. They are who they are today because of him. He has followers who are loyal to the sitting president. This will not go quietly.

“We have had enough times that rich people victimize the poor people, this is wrong,” he says.

Listen to the audio  about Levels and Shashl below;