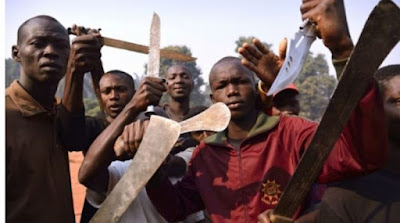 Two illegal miners known as Mashurugwi reportedly killed one another with machetes following a bloody brawl on Monday of last week.

The fight at the Dombwe Business Center between Tapfumaneyi Muza (28), of Hwinya Village, Chief Nhema, and Gilbert Dendere (29), was so intense, according to witnesses, that they fled to hide in the bushes for fear that the knives, machetes, and axes used could be used against them.

The witnesses didn’t return to the scene until after the commotion subsided, but alas, they discovered the two protagonists lying on the ground next to each other, dead.

According to Midlands spokesperson Emmanuel Mahoko, he has not yet received the case.

Muza had been released on bail from prison three days before the fatal fight for attempted murder. Abitar Mugari of Pamacheche, Gundu and Dube Legal Practitioners represented him in his bail application.

According to The Mirror, on November 28, 2022 at 9 p.m. at Dombwe Business Centre, Dendere approached Muza, who had a grudge against him, and they began fighting. Muza stabbed Dendere several times in the chest with a Columbia knife. Meanwhile, Dendere stabbed Muza in the neck and struck him with an axe on the left ear, killing both.

The bodies were collected by police after they were called to the scene.

Muza was previously charged with stoning police officers. He allegedly stoned a cop on duty in Dombwe and stabbed him three times with a knife. He took his gun and handed it over to the nearest headman.

“Muza was recently granted bail for disarming and stabbing a Police officer at Hwinya Business Center. He was a notorious machete fighter. My view is that those facing murder cases should not get bail especially here in Shurugwi where murder cases are rising daily,” said Manungo