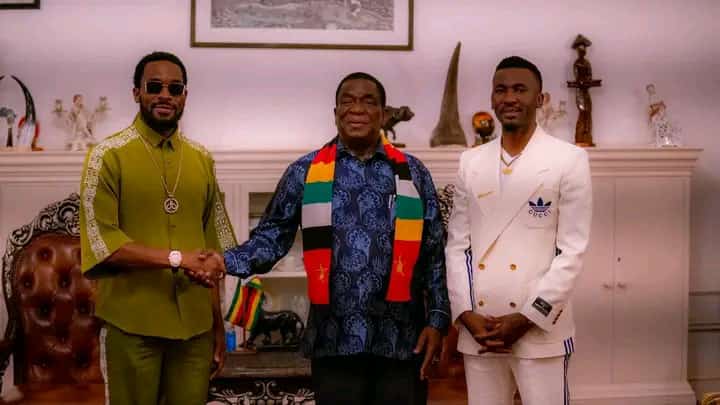 Without much ado, the duo completed shooting a music video which was sponsored by controversial celebrity prophet Passion Java.

Speaking to H-Metro, Boss Lashan said the song will be released on February 1.

“The song is called Million and it was produced by popular producer, DJ Oskid.

“The video shoot is currently underway because D’banj has to leave early. The video should be out early February,” he said.

D’banj, who flew into Zimbabwe on Tuesday, hailed Zimbabweans for their hospitality.

“The last time I was here; it was a good experience as the creative industry in Africa is fast growing,” he told journalists shortly after his arrival at the Robert Gabriel Mugabe International Airport.

D’Banj met with President Emmerson Mnangagwa at the State House together with Passion Java.

Speaking during an interview with DJ Ollah 7 on Star FM, the Nigerian superstar said he has adopted a new name after landing in Zimbabwe.

He named himself ED, Extraordinary Daddy.

Much to the chagrin of opposition political members, his wearing of the scarf, having nicknamed himself ED, as well as visiting the president, some sections began attacking him.

Her sentiments were countered by exiled former Minister Jonathan Moyo, who has recently doubled down from supporting Citizens Coalition for Change.

“It’s crass to allege that D’banj is a washed-up artist because you fear his Zim visit for a collabo with Roki_ harms your partisan politics. À la Stevie Wonder, icons like D’banj, P Square, and 2Face never wash up; they’re pop GOATs, TRAILBLAZERS, with timeless not once-off hits!”

Frankly, D’Banj is an African superstar with a global presence. His legendary stature will not be dented by the usual childish games, just because of the scarf. And Passion Java is doing super great by linking Zim artists with the likes of D’banj & Koffi Olomide for collabos!”, he said.