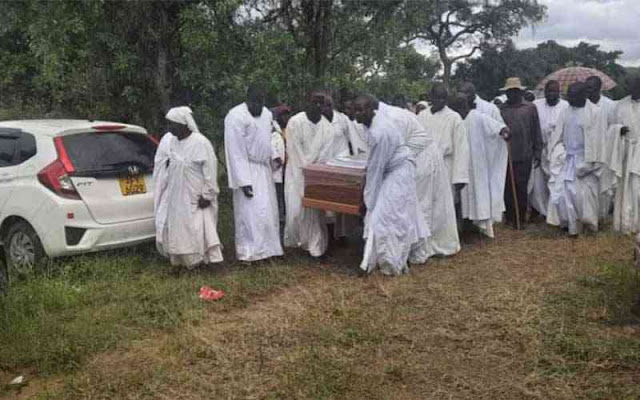 The family of the murderous police officer, Jaison Muvevi, apologised to two of the families of the three victims who were killed by him in Hwedza last week.

To interact with the grieving family, they enlisted the help of Zanu PF officials, local traditional elders, and police detail.

The Muvevi family made the customary payment of $300 USD to begin the discussions and to acknowledge that their son erred by committing a major offence, NewsDay reports.

They afterwards apologised to the family elders and went to the house of the late Madzibaba Silage (actual name Crispen Kanerusine).

However, tensions rose when the Kanerusine family insisted on the mother of the accused being there.

“Where is Jaison’s mother? She should be here. She was close to Madzibaba Silage, they worshipped together and why did she fail to come and bid farewell to him?” charged Madzibaba Silage’s relative.

#UPDATE #WedzaShooting
🔴Police Commissioner-General Godwin Matanga says it might be risky being a police officer, but it is an interesting job. pic.twitter.com/u5ACHVYVhZ

A mournful mood filled Madzibaba Silage’s residence in Zinzombe village as thousands of followers of the apostolic sect, locals, and politicians, among others, paid their homage to the respected faith healer.

The Muvevis then gave the family of Madzibaba Silage $300 as a funeral gift. The family first opposed the cash though.

The family had to be persuaded to accept the money by well-known apostolic sect leader Madzibaba Simbarashe Nengomasha.

The Muvevi family was also instructed by the Kanerusine family to return and seek advice from the local traditional elders regarding the proper ways to exact revenge on the deceased’s ghost.

In order to start a conversation, Mudzamiri told NewsDay that they had to go to the grieving relatives.

“We are the family; we admit the wrongs done by our son. We are here to mend bridges and see how best we can deal with this issue. We are truly sorry for what happened, and we want the families of the victims to accept our sincere apologies,” he said.

The family of the accused is also planning a trip to Mberengwa, in the province of the Midlands, to start a conversation with the family of Maxwell Hove, a third victim and a senior Hwedza police officer who was also shot dead.

“As sect leaders we say they have to be here to at least start the process of avenging the spirit of the deceased persons. As neighbours or the society, we need to reach a consensus, we pray for peace, what has happened will not be reversed, it’s a single person, Jaison who did all this but his family has come; hence the need to reach a consensus and move on,” he said.

Muvevi was arrested on Monday in Mozambique while fleeing from justice. He appeared at the Harare Magistrates Court yesterday charged with illegal possession of firearms. He was remanded in custody to tomorrow.

The murders were triggered by accusations that he was involved in rituals and occultism.