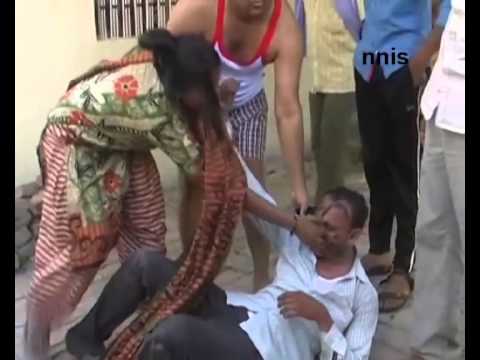 There was drama recently in Mufakose when an agitated mother-in-law beat up her daughter’s husband for failing to provide for his children’s upkeep but squanders all his money at a local bar.

In a video trending online, the mother-in-law, armed with sticks, goes to the be were her son-in-law was having booze and started humiliating him.

Social media commentators had different reactions to the incident;

Am sure gogo was tired and fed up of feeding her daughter and grandchildren yet the man is very much alive and able to feed his family but decided to neglect them and put drinking beer as a priority. Of course it may be wrong but the wife was very much in agreement to this. Mothers it’s so annoying to see such a big man spending all his takings on beer forgetting the family. We may not understand and feel for another woman because we have never experienced it.
Cynthia Amina Auphi
Ehe arikuresva mkwasha but let’s remember tichaonana everyday and how are they going to face each other hasha dzapera? I am sure they could have chosen a better way to try and solve the ongoing matter
Sharon Kaske
Advertisement
Vanozotarisana sei after this , there are much better ways to resolve such issues. Ndaseka hangu

, but for real this ain’t right
Takue Wilson
Men are are victims of gbv out there but there is no even one organisation that stands with man ,he is wrong yes but no one is above the law and deserves such beatings and that humiliation.
Justice for that man must be brought to book
Murongazvombo Divine. T ·
Men conceal emotions and take refuge kubhawa etc. Nigel Slick Maritinyu said it clearly. After all, men go through a lot and they need support
Joseph Mvero
I have a disenchantment with the approach which to me is primitive and humiliating.In child welfare circles those are allegations for neglect and such matters need to be dealt with by institutions such as the child welfare and courts.An investigation on to why the father is neglecting the children and assisting him in assuming his responsibility (family preservation) which is aimed at ensuring that the children remain under the parental care and that be there no statutory interventions where children are removed from the care of the parents.
Thandeka Madamombe
And if the guy had retaliated it was going to he deemed as violence but because it’s a ambuya “a woman” hitting the guy she’s done well ….
Mmmmm I pray my son never goes through this ,probably he gets more abuse at home that’s leading him to spend his time away from his wife and kids
Men feel the pain also
Advertisement
Related Topics:
Up Next