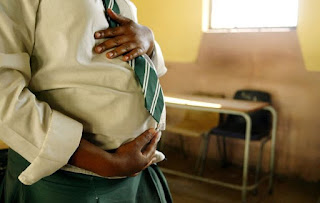 THE Loreto High School student who gave birth and received post-natal care at the school hostel is set to return to class.

Before being moved to Silobela Hospital for additional treatment, she was assisted by health focal teachers, The Chronicle reports.

The incident was later reported to her parents, who transported her home to Gweru, where she is said to be in good health.

Attempts to contact the family were futile since they refused to speak to the media, stating that they prefer to handle the situation quietly.

According to the school authorities, the 15-year-old transferred to Loreto High at the beginning of Third Term last year and chances are high that she was already pregnant when she enrolled at the Roman Catholic-run boarding school.

Information gathered by the Chronicle indicate that the girl is set to return to class in a month’s time.

Government policy is that girls who give birth are allowed to return to school and continue with their educatiion.

School head Mr Phillip Mapiravana said the pupil was free to return to school and continue with her education as is Government policy.

“The girl is welcome to return to school whenever she feels that she is ready. We are guided by the Education Amendment Act of 2020 which makes it a fundamental right to access education even after giving birth,” said Mr Mapiravana.

Ministry of Primary and Secondary Education spokesperson, Mr Taungana Ndoro said they have since dispatched a team to the school to provide socio-psycho support.

“We have dispatched our learner welfare department to provide socio-psycho support to the pupil as well as other pupils at the school. Our Education Amendment Act makes it mandatory for every learner to access education,” he said.

Parliamentary Portfolio Committee on Primary and Secondary Education chairperson Mr Torerai Moyo said any learner who falls pregnant is not supposed to be expelled from school.

“The learner goes on leave for maybe two to three weeks upon giving birth and then resumes classes. Her fundamental right to education is guaranteed. She must feel comfortable in class because her rights are enshrined in the Constitution,” he said.

Mr Moyo who is also MP for Gokwe-Chireya, said the socio-psycho support that the children are receiving should guard against stigmatisation.

“The girl should not be stigmatised when she returns to class. The Portfolio Committee on Primary and Secondary Education however urges pupils to abstain from sex which results in early pregnancies,” he said.

Pediatrician, Dr Crispen Ngwenya said child birth is a process, which involves a lot of psychological support and advance preparedness.

Dr Ngwenya who is also Zimbabwe Medical Association (ZIMA) Midlands Chapter president, said the pupil might require a lot of assistance and more time to recuperate before she goes back to school.

“We might need to give her enough time for her to come to terms with the situation and to find herself again. She needs to rest for a long period because this is a complicated issue,” he said.

While normal maternity leave is about 90 days, Dr Ngwenya said the pupil might require a year or so before she resumes lessons.

Lobby groups added their voices saying a conducive environment should be created for the pupil to return to class.