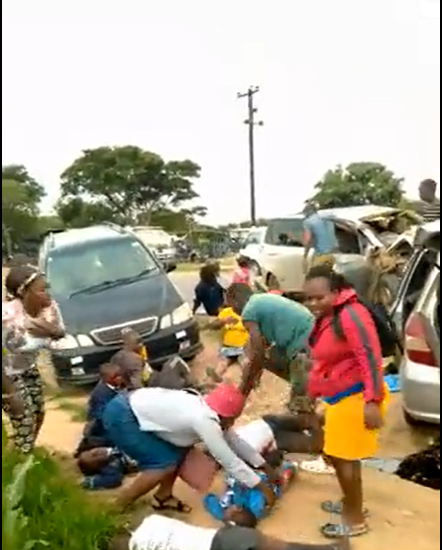 Two schoolchildren were killed in Nyameni, Marondera after two pirate taxis popularly known as mushikashika collided head-on along Ruzawi Road this afternoon. Reports suggest that a driver of a Honda Fit from Marondera attempted to overtake another vehicle, resulting in a head-on collision with another Honda Fit carrying school children.

The two cars collided head-on in Marondera this afternoon.

According to The Herald, the injured were ferried to Marondera hospital while the deceased were taken to the same hospital’s mortuary.

THE Loreto High School student who gave birth and received post-natal care at the school hostel is set to return to class.

Before being moved to Silobela Hospital for additional treatment, she was assisted by health focal teachers, The Chronicle reports.

The incident was later reported to her parents, who transported her home to Gweru, where she is said to be in good health.

Attempts to contact the family were futile since they refused to speak to the media, stating that they prefer to handle the situation quietly.

According to the school authorities, the 15-year-old transferred to Loreto High at the beginning of Third Term last year and chances are high that she was already pregnant when she enrolled at the Roman Catholic-run boarding school.

Information gathered by the Chronicle indicate that the girl is set to return to class in a month’s time.

Government policy is that girls who give birth are allowed to return to school and continue with their educatiion.