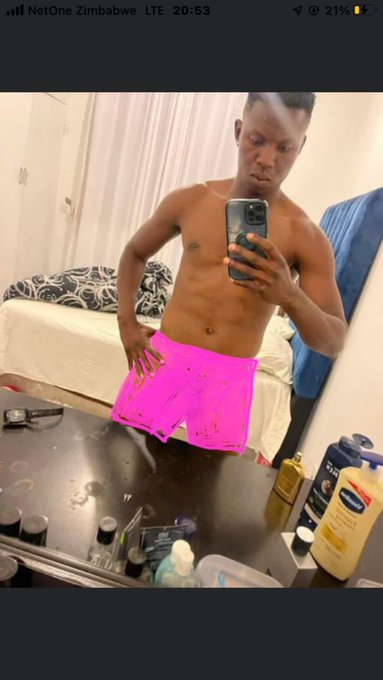 Chillspot Records music producer Levels yesterday embarrassed himself when his nυdes were leaked on social media.

The popular Zimdancehall star had a picture leaked showing his 4-5 while standing in front of a mirror.

Levels says that the nυdes were leaked after his Samsung S21 phone was stolen at a local nightclub.

The criminals are the ones who accessed his phone and posted the images that were on the phone.

He has since apologized for the mishap.

My Samsung s21 was stolen from pabloz nezuro after a small fight so these where in phone but I’m sure they are done now.

It seems the man is really loved by many as they have been kind to him and gently accepted his apology.

Zimdancehall sensation,Enzo Ishal, who has had many hit songs produced by Levels empathized with him;

Many other fans expressed the same and urged the producer to continue doing hard work;

Advertisement
jullian_chipepera
You did nothing wrong level you trusted whoever you were sending to. Those who are used great are always attacked dont feel condemnation my brother. Don’t allow gossip, lies, and hate dilute or stop your progress! Your dreams & goals are more important than the nightmare they want to cause. Keep Rocking!🔥🔥🔥🔥👏👏👏👏
pachopisa__tv
Zvinowanikwa bro , God bless you , tese tiri vanhu ❤️👏Apology accepted
mr_zim_fit
Apology accepted zvinowanikwa , tiri vanhu venyama tese tinokanganisa 👏
jusadementor
Its all good king, it will pass. Forward nemaRiddim and helping the young budding musicians earn a living from dancehall vibes🔥🔥🔥🔥
ayiie_juicy
Mune hombeee mune hombeeeeee mota yenyu mukoma ihombe😂😂😂😂
zimstars
People are laughing and mocking Levels but God knows all your secrets but doesn’t expose them, he grooms us and forgives us. You’ve all done shit worse than this. If God decided to end the world now and expose everything you guys have done, you will realise Levels has it all good. When humans expose you, it’s just slightly bad. When God exposes you, in front of the whole world, you are gonna realise you should be defending a fellow brother. Let those who have ears hear.
Related Topics:
Up Next

MY ‘Friends’ Sold Me To Sεx Predators: Sandra Ndebele